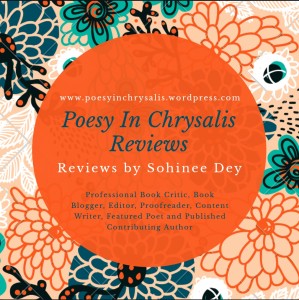 Welcome to Poesy In Chrysalis 😄. I wanted to show off my new logo, so had to do this 😛.

I haven’t done this introduction in ages 😂.

Just had a quick announcement to make. FEBRUARY REVIEW REQUESTS will be closing soon (yes, will be closing early this month). If you want to request a review, write to me at query.sohinee@gmail.com. Before requesting a review, don’t forget to check out my Review Policy.

Aratrika Reddy, the charismatic CEO of ARYA Holdings Ltd., has just 8 Hours to save her company from certain bankruptcy.

The multi-billion dollar hotels to steel conglomerate, founded by her mercurial father, liquor baron Madhusudhan Reddy, has many suitors, all of them plotting a hostile takeover. Aratrika’s estranged husband, Siddhartha is one of them. His inside knowledge is the real ace up his sleeve. The Rathores, the Reddys’ arch-rivals are looking to buy ARYA too and thereby settle old scores.

Aratrika has to weave her way through a litany of lawyers, politicians, bankers, bureaucrats, investors, power brokers and her dreaded family. Behind the scenes, Jagannath Rao, her wily uncle, is playing a dangerous double game of manipulation. Her father Madhusudan is furiously pulling the strings from behind the scenes. To add to the confusion, overseeing the whole sale process is her old flame, Peter.

Over the course of a single night, 8 Hours to be precise, Aratrika must fight the demons at the gates of her company and those within. It’s a fight to the bitter end.

A fight that Aratrika does not want to lose…

In corporate business, it’s always hard to trust anyone. The close ones can back stab you and the people who are far away will wish you bad luck. Some will envy you and some will keep you close, try to gain your trust and then take advantage of your trust. It happens, we have all seen such incidences in movies, daily soaps, newspapers and probably have even read in fiction.

Read my previous review of The Wild Cat by Taanya Sharma

The plot is relatively simple and straightforward than I thought it would be because as far as I have seen, thrillers have a tendency to twist everything and make it sound more complicated than it actually is. The blurb is pretty straightforward and one could easily garner what the book is going to be about. The cover is also quite simple comparing to that of other mystery and thriller books; no dead bodies lying around, no blood, no people holding guns nor someone staring back in fear. The cover has got a sand time which implies time, which indeed is the main component of the book. So, at first glance, everything about this book is straightforward, no beating around the bush.

Aratrika Reddy who is the CEO of ARYA Holdings Ltd, the multi-billion dollar business empire with hundreds of hotels and steel conglomerate, is provided with only 8 hours to save her company from the clutches of bankruptcy. The company which was founded by her father with many under-the-table dealings is now under the control of her daughter, Aratrika and she had swore to build the foundations of this business empire on clean grounds. What she didn’t know was she would have to fight against a takeover. Everyone’s eye is on ARYA and they want to settle old scores by buying out the company. Her own family members, the Reddy and her husband’s family members, the Rathores, all have their eyes set on ARYA. Aratrika has to fight against all the suitors, including her estranged husband, Siddharth.

Fighting her way through the throng of lawyers, suitors, family members, known and unknown people, will she be able to save ARYA?

I thought that the book would be really fast-paced because let’s be honest here, the blurb was straightforward and when you already know the plot and from the sound of it, it’s not much twisted that it would require much pages to fit in but, the book does have a lot of pages. The pace of the book was slow considering my expectations of the book being a fast paced suspense thriller. Not boring; just normal, I guess. Aratrika has to find her ground, has to overcome her fears and has to figure out who she can trust and stop the company from falling into the pits of bankruptcy. Neither her professional nor her personal life is stable, how she focuses on the current problem and drives away from all the relations that tried to bow her down is to see. She not only has to make sure that there are no attackers on the outside but also have to notice whether anyone is trying to pull any strings from the inside. It’s rare to find a woman as a lead protagonist and I am happy that the author crafted one such story and gave all the power to Aratrika.

This book is not only about Aratrika trying to save the business empire, but it’s also a test of the relationships. She’s on a battle where she has to strive against all her personal ties and also fight off her inner demons all in the span of 8 hours. Whatever happens in these 8 hours teaches her to believe in her own self and that it’s better not to depend on anyone else except yourself.

The language was lucid. The narration started off on a slow pace, gained speed in-between, slowed again and then picked up pace when it neared the end. So, I didn’t really find the flow of the narrative to be smooth. There aren’t many descriptions about the surroundings and situations, it’s mostly dialogues. But when there are descriptions about the scenes, there are almost no dialogues there. So, this irked me a bit since I prefer to have a balance between descriptions and dialogues. But, I didn’t really pay attention to it while reading.

I wouldn’t say that this book is so engrossing that it would keep you on the edge of your seat, but, it definitely has the power to compel you to finish it in one sitting. There are sub-plots which has been intricately fabricated within the plot which can keep you engaged and also distract you from the actual plot. All in all, ‘8 Hours’ makes up a for an engaging suspense thriller to be read in 5 hours! Well, the time depends. It took me 5 hours, it can take 8 hours for you, who knows? *wink*

There’s a comment section down below. Feel free to use it 😉. Would love to know your thoughts on the book and on my review too. 😇

A digital & marketing professional by day, an engineer & MBA by accident. Upendra is married and has a son. Upendra was first bitten by the writing bug when he was invited to write for one of India’s leading finance dailies. It soon turned into a love affair that turned him into an avid blogger and finally made him take the plunge into the unchartered waters of the Novel. Upendra now takes complex subjects like banking, consumer goods, mergers and acquisitions and turns them into nail-biting thrillers, making those dull and dreary numbers come alive. But he really hasn’t shifted his focus as such, for he still thinks of his books as numbers: 31, 60 and 8. 8 Hours is the third book in the Numbers series.

Note: I received a review copy from Writersmelon in exchange for an honest review.